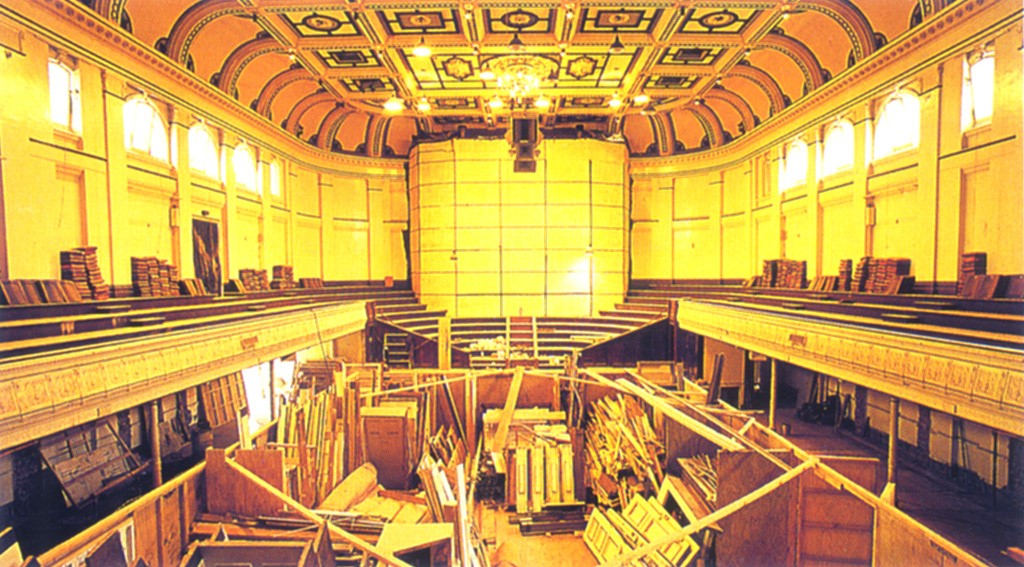 And while Wellington had been able to afford to build a clock tower 150 feet high, we couldn’t afford a clock. Requests were made to use the vacant clock faces for advertising, but they were declined.

Finally, in 1922, a bequest from John Blundell, the son of the founder of the Evening Post, could pay for a clock. The Town Hall clock chimed every single hour of the day, for nearly ten years – until the Napier Earthquake struck.

“While there has been little if any damage to the Town Hall clock tower, it is clearly an earthquake risk. As a precaution against future earthquakes, the city engineer has recommended the clock tower be demolished. Alterations including removal of architectural details and strengthening work will significantly change the appearance of the building, but are essential. Explosives will be used to bring down the Tower, and the original entrance portico will be demolished and replaced by a far simpler structure.”

In 1971 a council report found that the Town Hall may not withstand a moderate earthquake. Strengthening it would cost more than a new building.

Three years later, the council decided to accept a Civic Centre Plan which included building a new Town Hall and demolishing the old one. Though not every citizen supported the plan—

“Sir. It would be a monstrous folly if citizens of Wellington allow their acoustically renowned Town Hall to be dismantled before their eyes by an aggressive band of modernists. If the modern mediocre artists must have an alternative accommodation to propound their microphonic gimmickry I suggest that they be relegated to the Show Buildings and be free to scream hysterically. Now is the hour when we must not say goodbye to our old Lady Town Hall. All senior citizens should be prepared to stand up and sing fortissimo such a refrain.”

In 1978, a report from the Historic Places Trust suggested that just the auditorium could be retained, rather than the entire building. That same year, a petition was started by the Save the Town Hall committee, which included some prominent composers and musicians.

In May of that year, the council voted to proceed with detailed plans for the new Town Hall. But they also voted to retain the auditorium of the old Town Hall so it could be seen how the two halls worked side by side. Maybe the old girl would survive after all.

In 1983 the Michael Fowler Centre opened, and a year later the council voted unanimously to retain the old Town Hall. Wellington had the best of both worlds—a brand new town hall with superb modern facilities and an old town hall with world-class acoustics. The future of the grand old lady was assured.

By 1990, it had been decided that the grand old lady needed a facelift, and work started on the refurbishment of the Town Hall.

Important seismic strengthening work was done, the main entrance and stairwell were restored, and extensive repairs were made to the ceiling, balcony, and plasterwork. The seats were replaced, access to the stage from the dockway was improved. New spaces outside the auditorium were established and the brand new Ilott Concert Chamber was added.

The refurbished Town Hall was completed just in time the 1992 New Zealand Festival of the Arts.